Over 60 years ago, a small group of civic-minded members of the Cherry Center Grange came together to form the first volunteer fire department in Grand Traverse County. Ray Heller, Roy Hooper Sr, Claude Watson, Stanley Wood Sr, Harry Heller, Isadore Lardie Sr, John Lardie, Oakley Lardie and Arnold White became the first volunteer firefighters for Peninsula Township. They mounted a spray tank onto a Chevy truck chassis, added a pump and were ready to fight fires. They did their own training and bought all of the original equipment on their own. In the years following that humble beginning, hundreds of community volunteers have devoted thousands of hours fighting fires, protecting and safeguarding the residents of Peninsula Township.

During a recent interview, Oakley Lardie, the last surviving member of the original fire department, talked about the Cooledge fire in 1943. At that time, the township residents would use a bucket brigade to extinguish fires. They were able to save much of the furniture from that fire, but were unable to put the fire out. Realizing the need for better fire suppression services after that fire, the farmers got together at the Grange and started the Peninsula Fire Department. Oakley remembered the first fire using the newly constructed truck. It was a chimney fire at the Kiel Murray home that began just before church services. The fire spread to the cedar shingle roof and was successfully extinguished by the department. The only casualty was a pair of pants worn by Oakley.

In 1947, the Grange turned the fire department over to the township and a special assessment district was established to fund fire suppression services. Township residents also voted to purchase a new Reo fire truck to replace the vehicle made by the Grange members. The Reo was in service until 1960, when a new Ford truck with a Howe high-pressure fire pump replaced it. The Reo remained with the department as a back-up engine. As the years went by, additional vehicles and equipment were added to meet the growing needs of the Peninsula. A Rescue/Brush truck, purchased in 1974, was a 4-wheel drive vehicle used to carry extrication and rescue equipment. The department built the first portable hydrant truck in 1977 and it was the first vehicle of its kind in the county for pumping water from the bays into tanker trucks.

Station #1 located in Mapleton, houses the bulk of the department's equipment. The original building was constructed in 1946. The building was enlarged in 1984 to accommodate the growing department. When the community began to grow, the need to have equipment at both ends of our 18-mile long peninsula became a necessity. In 1976, Station #2 was built near East Shore Road on Center Road to provide additional coverage and to improve response time for emergencies. In 2020, a third station is proposed to be built at 19270 Center to service the residents of the northern portion of the township.

Many changes have been made to improve both the duties of the firefighters and to provide greater protection to our residents. Notifying the firefighters was originally done by telephone during the 1960's. One continuous ring would let the firefighters know of an emergency and the information would come over a party line. From there, members had a "red box" in their house that would set off an alert tone when there was an emergency call. This was, as the name says, a red box that tripped whenever there was a fire or ambulance request. However, because they were stationary, you were only aware of a call for help if you were home when the box was tripped. It was not a convenient way to get the call for help. Members needed a more movable form of notification. The pagers were portable and could be taken with the department members wherever they went, enabling them to respond more quickly to an emergency. The pagers carried by today's volunteer have the ability to store the address and description of the emergency they were called to and to monitor the county fire frequency for updates as they develop. Some members also have two-way radios that allow them to talk with Grand Traverse County Central Dispatch and other rescue personnel. If further assistance is required from other departments, they are only a call away and can respond immediately to the department’s needs.

Today, the department has 10 vehicles and 2 boats for responding to a variety of emergency situations. Many fire trucks have passed through the doors of the department and today the department two Sutphen and Spartan pumpers are capable of handling any fire that may present itself. We also have two tanker trucks, including our newest tanker, a 2019 International 3000 gallon Firovac vacuum tanker and a 2006-2000 gallon CSI tanker. Our first ambulance, a 1947 Cadillac, has since been replaced with several models, the latest being a 2000 Ford and a 2016 Ford F-450 4x4. We also have a 2 rescue boats for water rescue calls, one being a 2015 Safe boat that has all the technology to safely rescue people with a boat emergency, two wildfire capable trucks and many other pieces of specialized equipment needed to save lives and property.

Department membership has varied over the years as well, from a very few to nearly 40 volunteers. In 1989, the township hired its first full-time Fire Chief. In 1997, due to an increase in emergency calls, a second full-time Firefighter/EMT was hired. Your fire department today consists of 10 full time firefighters, 12 part time firefighters and 3 paid on-call firefighters. These dedicated men and women devote their time to assist the residents of Peninsula Township during times of emergencies. They have trained extensively, attending state-regulated classes and continuing education courses in fire suppression and emergency medical care. They continue to train each month to stay current and proficient in their skills. Our first EMT's were trained in 1975, when the first Emergency Medical Technician course was offered in Grand Traverse County. Today, we have 10 state-licensed Paramedics, 10 EMT’s and 3 Medical First Responders. 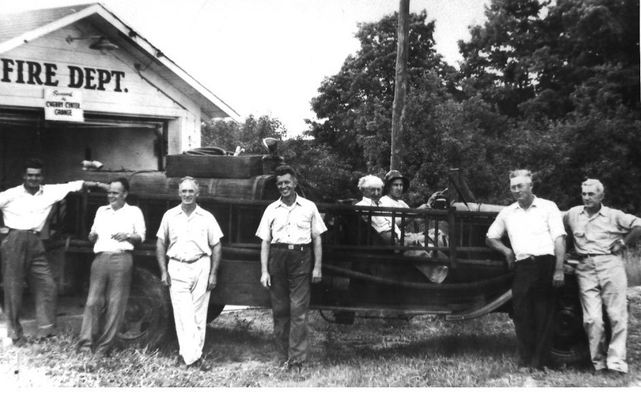